The Hobbit Trail: A Misguided Comedy Tour is a tour built for comfort, not speed. It’s not that we don’t move quickly – indeed some would say we’re moving so fast, they’ll never catch up! – but we’re at our best when performing in a new town night after night, every night.

We also, though, know when it’s time to take a break from 16-state whirlwind tours and what better time than the Holidays in Wisconsin. 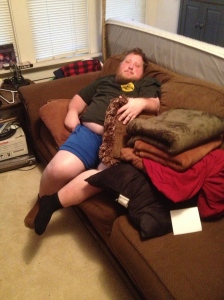 The Hobbit, Nate Ford, collects himself on “Spencer Dobson,” our extraordinarily comfortable couch.

That doesn’t mean we don’t work.

So far we’ve been to Abrams. Wisc., home to Kip & Donna’s Flyway, for a terrific night of very formalized comedy. Donna managed to transform the remnants of a haunted house party into a well-appointed comedy club in a matter of hours and Kip played amiable host into the wee hours.

Next we traveled to Amberg and Pembine, Wisc. for a weekend of last-minute shows. The folks at the Amberg Pub were welcoming and enthusiastic. 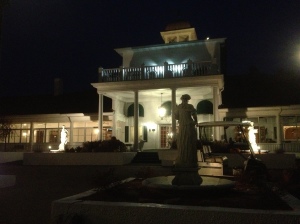 Our Home for the Weekend: The Four Seasons Island Resort in Pembine, Wisc.

We called the Four Seasons Club home for the duration of the weekend and spent late Friday and Saturday  in Boundary Waters Sports Bar with karaoke-master Dean. An impromptu mini-show during a break by the band in the Island Lounge capped off a perfect, relaxing weekend.

December kept us in the Midwest with our Tour of Three Clintons. Our good friend and compatriot Jeremy “Jer-Dog” Danley booked us at his ridiculously well- organized room at Boxcars Pub & Grub in Clinton, WI. Tim and his wife Randi run a top notch facility with a great staff and excellent food. But, as a former touring musician, Tim really knows what audiences and performers want and need to make it a memorable experience for all. The homerun they hit with every show in their 6-month season has independent comedians vying to get on Jer-Dog’s list with good reason.

Friday the 6th found us in Clinton, Ill. at Snapper’s Bar & Grill on the square in a downtown undergoing significant revitalization. Joe and his staff kept a first-time comedy audience well-served and engaged. With the help of our friend Drift Roberts 0f Peoria, Ill. acting as host, The Hobbit Trail was able to reset the dial for comedy in Clinton. We’re looking forward to a return and an interesting future there.

We wrapped everything up in Clinton, Iowa on Saturday, December 7th at one of our favorite places since forming The Hobbit Trail. Even with a change in ownership, Sports JunkieZ on South 5th felt just as inviting as our last visit. Even with temperatures in the single-digits, the Sports JunkieZ faithful turned out to catch our triumphant return.

We now get to catch a bit of a breather until January’s runs to the northwoods of Wisconsin, the western prairies of Minnesota and holiday parties throughout the midwest draw us back out where we really love to be most…

…The road to you and yours. See you soon.

One thought on “Home for the Holidaze”